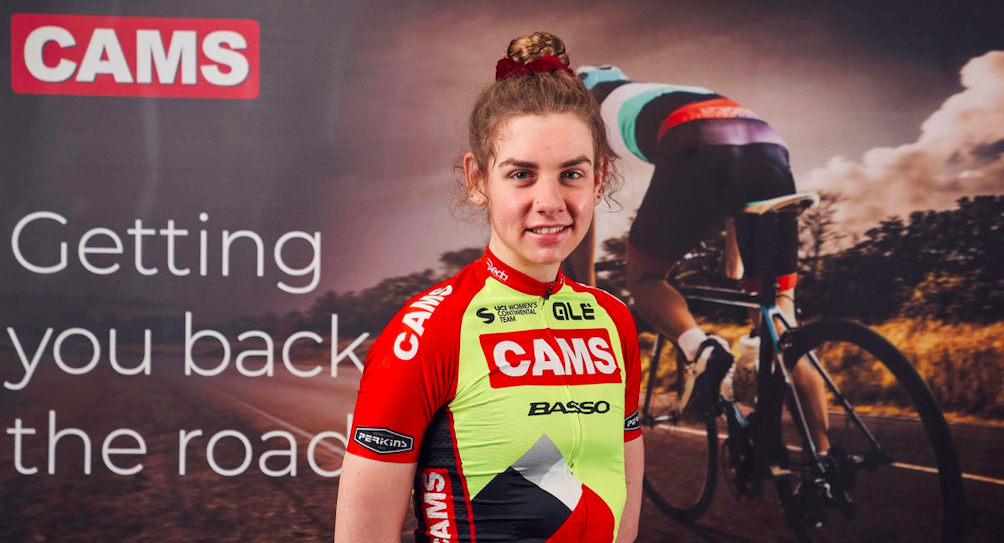 In the lead up to this year's AJ BELL Women's tour, we sat down and chat to rising talented British rider Jessica Finney.  Jess will be taking to the start line of this year's Women's Tour for the first time in her career. As a relatively latecomer to the world of cycling, Jess has quickly progressed through her cycling journey over the last four years. This season Jess has made the step up to compete at UCI level where she's  been riding for British continental team CAMS-Basso Racing.

The young rider from Portsmouth has certainly made her mark in the UK domestic racing scene this year. Throughout this year's Tour Series, Jess produced strong and consistent performances, which helped her team retain the overall title for another year. Jess secured a third-place finish in the last round of the Tour Series in Castle Douglas after narrowly missing out on the podium at the second race of the series in Sunderland.

Not only has Jess displayed her strengths on home roads, but this year she has also shown that she can perform and deliver on the international scene. In her most recent race, Jess finishing third place ahead of a strong peloton on stage one of the Ras Na mBan in Ireland. Unfortunately, she was caught up in a crash on stage two which resulted in her having to withdraw from the race. During the 2021 race season, Jess has also experienced racing at the top level of women racing, taking to the start line of the Healthy Ageing Tour, Omloop van de Westhoek, and the iconic Amstel Gold Race.

Without giving away any more information about Jess's success and cycling journey so far, here's what she had to say when we sat down and talked about everything cycling related.

Tell us how you got into cycling?

I always loved watching the track cycling on TV when I was younger, however, I didn’t start cycling until my late teens. I used to do a lot of other sports just for fun. However, I eventually picked up a bike in order to complete a local sportive with my friends. I got such a buzz from the event that I then joined my University Cycling Club (University of Portsmouth Cycling Club) which then introduced me to my local cycling club (Portsmouth North End Cycling Club) where I met a lot of people who gave me the support and guidance to try some racing. Four years later, I am now on the start line for my first Women’s Tour of Britain.

How would you describe yourself as a cyclist? What type of races do you like and how do you train?

It has taken me a while to figure out what I am good at and what I am not so good at. It’s taken me even longer to accept these. But I would say I am a ‘punchy’ rider – which is a kind of all-rounder - as I can have a good turn of speed, especially on the steeper gradients. Therefore, the races I like are the ones with 1-3 minute hills so that I can use my ability to attack these features whereas I find it most difficult on the steady and longer climbs.

I train most days of the week, generally hitting about 10-13 hours per week on the bike. I work part-time so there is a balance between work load and training load that can sometimes affect my weeks. I train using a power meter and a heart-rate monitor to track my progress and work with a coach to help optimise my training to meet the demands of my next goal (generally to win the next race on the calendar).

You made the move to step up to elite racing this year.  How's it going and what challenges have you faced?

It’s been a very strange time to be trying to pursue a career in professional cycling. I guess I have not really experienced the typical progression that most others have. So my experiences and challenges are probably quite unique due to the pandemic.

Racing at the elite level is so special. I was able to compete in my first World Tour ride this year, the Amstel Gold Race. It’s just a different level, the professionalism of the other athletes is obvious, the speed they race at is just a new level, and they just don’t seem to tire out. The thing I took away was that I was capable of holding on to the split when they attack up the hill. However, in other races, the group would stop and everyone catches their breath. At the elite level, there is no stopping, it’s still flat out even after attacking. So I had no time to catch my breath. Therefore you come to the next section and I’m still on my limit, yet the elite women have recovered somehow and can go again. That’s what was so impressive to me, and a real eye-opener. It’s not necessarily all about that one time effort, it's doing it multiple times, and still having that ability to recover at a hard effort. I’m excited to get back to this level as feel with this experience I have been able to really focus and work on this limitation. However, being in a small team, these opportunities are relatively rare. So I’m really excited to be racing the Tour of Britain.

A challenge that comes to mind is the race calendar. My race calendar is never certain, therefore this makes planning the training extremely tough. I have spent most of my time this year in a good ‘ready-to-race' shape in case racing comes up, rather than really trying to peak for specific events. Other challenges include the travelling. Again, due to the pandemic, it was challenging to try to get to some races abroad. This is where being in a team is so important, as they deal with all the headaches of how to get there, whereas I just turn up and get driven to the start line.

Yes, definitely! I’m looking forward to just racing against the best in all honesty. It’s been a strange few years, with few opportunities. So any race is special to me at the moment. I think the opportunity to learn from the best riders in the world and maybe even beat a few is what I am looking forward to the most.

I'm quite anxious about my form. This is a rare opportunity for me to compete against the world best and therefore it’s a great stage to show what I can do. However, I haven’t had the usual run-up to the race. Two weeks ago I crashed at the Ras na mBan stage race in Ireland and got a concussion. I have only just recovered and started riding my bike again, so I have no idea of my form. I guess this can be good. It takes the pressure of the race, as I now have less expectation of what I want to get out of the race.

In terms of stages, the time trial stage is what worries me the most. We are a small team that can’t afford TT bikes for the riders and I can’t afford one myself, so I will be performing the TT on my road bike. Considering the fastest time is likely to be set by someone like Van Vleuten on a TT bike, it’s going to make my effort on a road bike very challenging in order to keep within the time limit.

What would a successful debut Women's Tour look like to you?

I think, given where I am today, a successful Women’s Tour for me would be to finish the race. I have greater ambitions than that, but it’s all about making improvements from last time. Considering this is my first time, the first thing for me really is to finish and absorb as much of the experience as I can. Next year I then have something to build from. However, I am looking for more than this in this tour (if my form is near my best). I’ll be looking to try race the race, which sounds silly but I don’t just want to ‘get round’. I want to make an impact on the race. Either getting in a move, making a select group, or leading out our sprinter – something where I can say I affected the race, I made a difference to that race.

We would like to thank Jess for taking the time to share her cycling journey with us. The Pillar team are super excited to see how Jess gets on in her first-ever Women's Tour, and we wish her the best of luck. Throughout the Women's Tour, Pillar will be providing a daily report on all the race actions. We are also fortunate enough to have Jess providing us with her progress and race action from inside the peloton.

Keep up to date with Jess: